All about Stephanie Booth 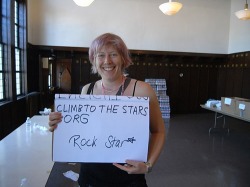 This is Stephanie. As you can see in the picture, her childhood dream was to be a rock star. As she was too shy to sing or act, she became a blogger nearly 10 years ago. Yes, that's a long time ago! It's all there on Climb to the Stars. She's recently taken up singing in a local singing group called Café-Café and she's very happy about it (she's less shy now, and being surrounded by 70 other singers on stage helps).

She has been doing judo for 15 years, likes photography, writing, sailing, hiking, reading, talking, and TV series. And a whole lot of other things, but the list might get boring for somebody reading this. She has an Indian cat named Bagha (he's an online celebrity) and on the insistence of her Grandma, she has started writing a children's book based on his life.

If she has an Indian cat, it's because she lived in India for a year while she was studying history of religions at university. That's when she learned HTML, CSS, and PHP. She lives in Lausanne, Switzerland and is very attached to her hometown.